In the past 50 years understanding of cancer has advanced considerably, and treatments are far more effective, and less punishing. From 1991 to 2015, nearly 2.4 million cancer deaths were averted in the US alone, primarily as a result of new and innovative therapies. Some cancers that were once terminal in every case are now generally treatable. In 1968, a child with acute lymphoblastic leukaemia (ALL) had a diagnosis that was almost uniformly fatal. Today’s best treatments provide cure rates approaching 90% for ALL.

These gains have been hard won. Fifty years ago, doctors had few tools to treat cancer, success was limited and interventions often difficult for patients to endure. The development of successful treatments has followed our understanding of the biology of the disease, attained through incremental advances and occasional moments of great insight.

The fight, however, is far from over: cancer remains the second leading cause of death globally. There has been tremendous progress in some areas, but there is also huge disparity in outcomes depending on the type of cancer and geography. Approximately 70% of deaths from cancer occur in LMICs , where many of the improved outcomes seen in well-resourced settings have not carried over. With around one-third of deaths from cancer due to the five leading behavioural and dietary risks, cancer prevention remains one of the key priorities for public health.

The discovery that specific toxic chemicals administered in combination can treat certain cancers ranks as one of the greatest innovations in modern medicine. Childhood leukaemia, testicular cancer, and Hodgkin’s disease – previously fatal – are now generally curable through chemotherapy.

The approach of using chemotherapy to kill cancer cells – which unavoidably also kills non-cancerous cells – dominated the 1960s and 1970s. However, it had severe side effects, and some did not survive.

By the 1970s, breast cancer was among the leading causes of death among American women. The radical mastectomy, an extreme surgery pioneered at the turn of the 20th century, was based on the flawed initial understanding that cancer spread outwardly in a concentric fashion from a central point.

In 1971, the US embarked on a ‘war on cancer’ beginning an era of huge investment in cancer research. Limited understanding of the disease meant that research was based on trial and error, and progress was slow. Treatments lacked an understanding of the underlying mechanism of cancer, inflicting damage while saving some lives. Ultimately, patients demanded less punishing and more effective treatments.

Advancing our understanding of the disease

In the 1970s, there were three competing theories about what causes normal cells to turn cancerous: viruses, chemicals in the environmental, and our genes. Each had evidence but all lacked an understanding of carcinogenesis.

As the field of microbiology advanced significantly, oncogenes and tumor suppressive genes were discovered: genes in our bodies that cause normal cellular growth, but if disrupted, can lead to cancer. With a better grasp of the metastatic process, cancers such as breast cancer were understood as systemic, rather than local.

And the need for more effective treatments was more urgent than ever. By 1986, there had been great strides in the understanding of the disease, but few new treatments. The fact that people were simply living longer, combined with diet and lifestyle factors such as smoking, meant that mortality from cancer was growing.

From a deeper understanding to improved patient outcomes

Understanding of the human genome has great potential to tailor-make medications and is enabling major steps forward in drug and vaccine development.David Heymann, London School of Hygiene and Tropical Medicine

By the 1980s, advances in our understanding, improved detection and diagnosis, chemotherapy, and systemic drugs – found to be effective in combination with less extreme surgeries – greatly benefited patients. The five-year survival rate in the US went up from 75% in 1975 to over 90% today.

Oncologists started to use newly acquired understanding of oncogenes and of monoclonal antibodies to develop targeted treatments. Monoclonal antibodies are custom-designed antibodies that target a given substance or cell type. As a class of ‘large molecule’ drugs, they are much more complex than traditional small molecule drugs and can interact with more challenging targets. Once monoclonal antibody rituximab was developed to bind to and eliminate the non-Hodgkin lymphoma cells, the development of more than a dozen new monoclonal antibody cancer treatments emerged. Trastuzumab, in combination with chemotherapy, increased breast cancer survival rates by 37% with virtually no additional side effects, a significant achievement.

In 1973, geneticist Janet Rowley identified the specific genetic mutation in Chronic Myelogenous Leukaemia (CML). In the 1990s, Ciba-Geigy invented a drug that seemed to wipe out CML cells. In 1998 the results were out: imatinib was a huge breakthrough and would later help increase the five-year survival rate for people with CML from 31% in 1993 to 66% between 2006 and 2012.

Another huge breakthrough was the discovery in 1984 by Harald zur Hausen that two strains of HPV were responsible for approximately 70% of cervical cancers, winning him the Nobel Prize. This led to the development of the HPV vaccine with the potential to virtually wipe out cervical cancer through vaccination.

These treatments, along with the completion of the Human Genome Project in 2003, contributed to a growing optimism. But with the launch of the Cancer Genome Atlas in 2005, it became clear that the cancer genome is much more complex than originally thought.

The struggle was to find molecules that could target a single gene perfectly without causing toxicity to the patient. And there was a new problem: many of the new drugs that had been developed stopped working in patients after a matter of months. Researchers soon understood why: when cells become cancerous, they also become 100 times more likely to genetically mutate than regular cells.

DNA and genome mapping is advancing our understanding of the specific mutations to target. It is now understood that there are around 200 genes in breast and colorectal cancers alone operating under specific pathways that can be disrupted. With the cost of genetic sequencing plummeting, it may be possible to treat each cancer patient with a personalised combination of drugs.

Despite these advances, the vast majority of cancers today are still primarily treated with chemotherapy. Survival rates, and rates of cure, are much improved, particularly for early stage breast, colon and prostate cancer. Some approaches reduce the side effects experienced by patients undergoing chemotherapy.

In many cases, where you were born and who you were born to still decides whether you will have access to cancer treatment or not. Mariângela Simão, WHO

The complexity of cancer as a disease makes treatment costly: clinical research for new cancer medicines takes an average of 1.5 years longer than treatments for other disease areas. But improving access to cancer treatment does not have to require significant increases in costs. Countries with similar levels of cancer spend currently have very different survival rates for the same types of cancer. 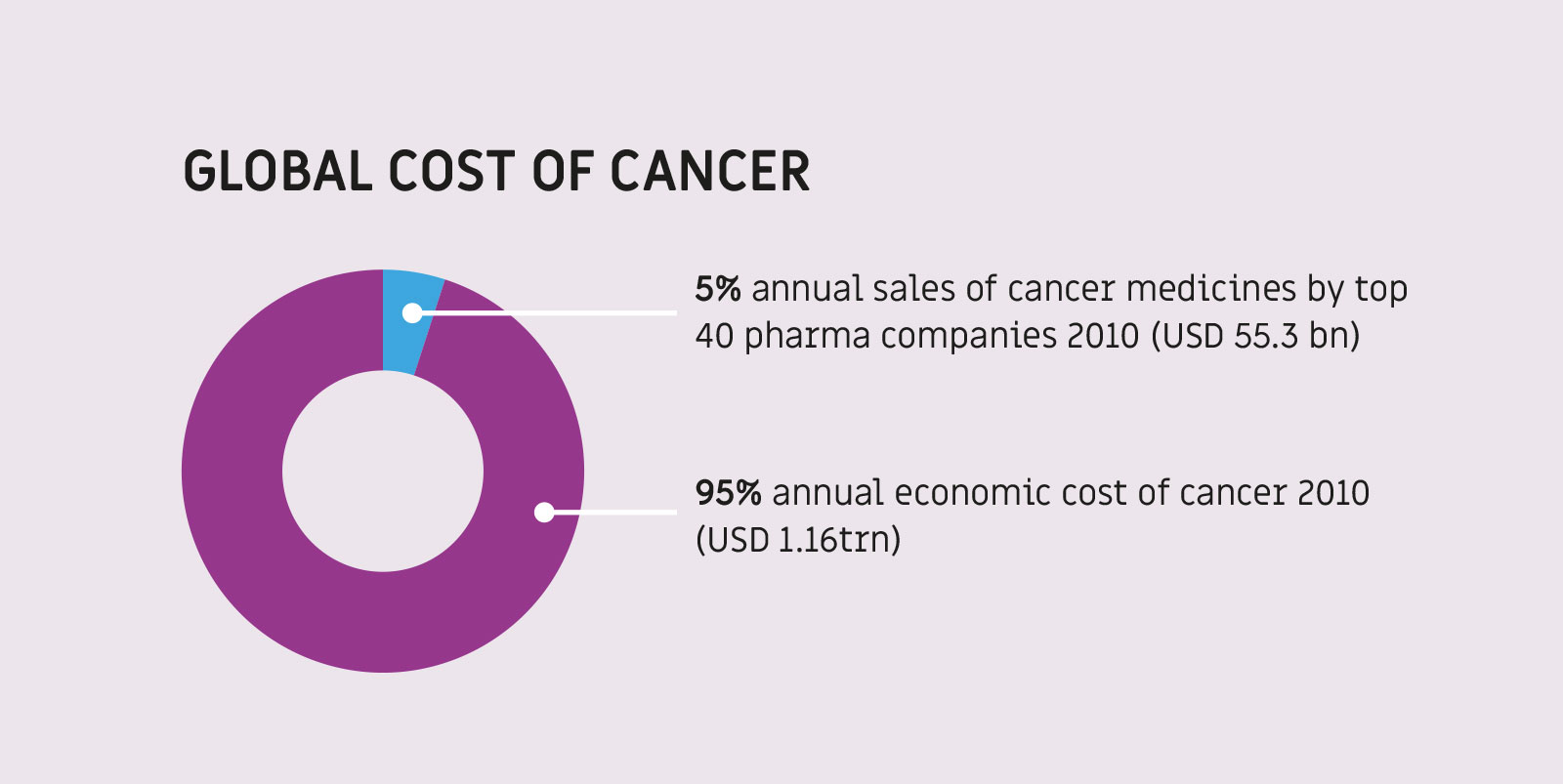 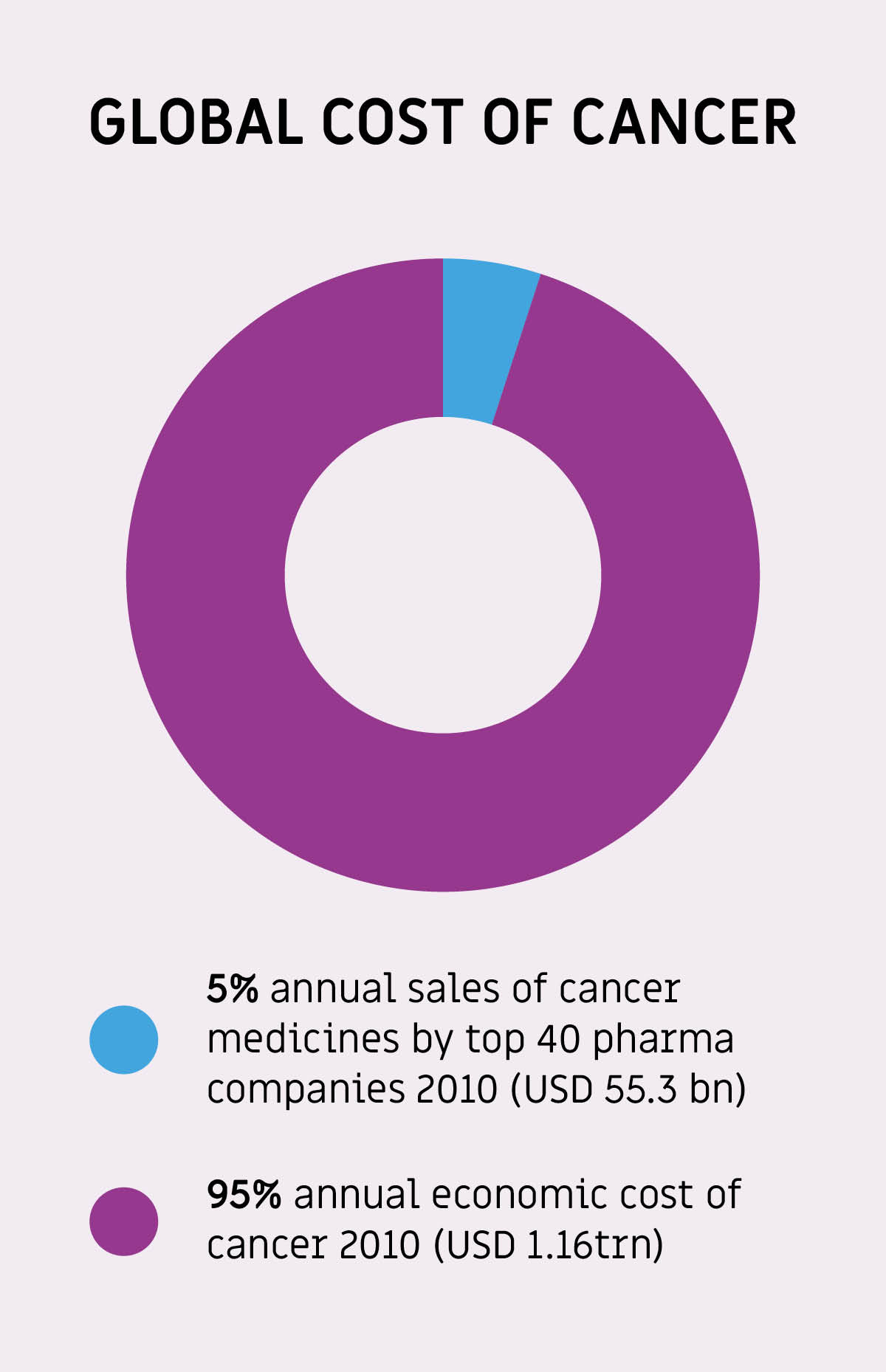 Improving cancer treatment, and access to treatment, requires a holistic approach from prevention through to treatment and palliative care. Better treatment and improved survival means people are able to return to work and play an active role in society and the economy. It also enables people beyond working age to live longer, more active and fulfilling lives. A study in the UK showed that GBP 15 billion in public spending on cancer research since the 1970s had resulted in GBP 124 billion worth of health benefits to the public.

The inequalities of access are felt most keenly in developing countries, where population ageing, unplanned urbanization, and the uptake of unhealthy lifestyles means that cancer and other NCDs are on the rise. There is a lack of capacity for prevention, public education, screening and early detection, diagnosis and treatment.

Collaboration is essential to tackle healthcare challenges in the developing world. For example, Access Accelerated unites 23 global R&D-based biopharmaceutical companies with the World Bank, the UICC, and Boston University in an effort to demonstrate that significant progress can be made addressing NCDs together. In 2006, Sanofi set up the My Child Matters program to fight childhood cancer which, through 55 projects in 42 countries, has contributed to train 20,000 healthcare professionals and treat over 75,000 children.

The 2017 WHO Cancer Resolution reaffirming cancer control as a critical health and development priority was landmark. It is an opportunity for national governments to drive action on cancer and seek partnerships.

Growing optimism for a new era in cancer treatments

Today, a new era in medicine is revolutionizing how we diagnose, treat and hopefully one day cure the many diseases that make up cancer. The pipeline has never been more promising with 79% of medicines in development for cancer having the potential to be first-in-class treatments. More than 70% of cancer medicines in the pipeline also have the potential to be personalised medicines.

The latest and most exciting development in our search for a cure for cancer is in the growing field of immunotherapy or immuno-oncology. These therapies enlist and strengthen the power of a patient’s immune system to attack tumors. A class of immunotherapies have already achieved FDA approval in a range of other cancers, including certain types of melanoma, non-small cell lung cancer, renal cell carcinoma, bladder cancer, head and neck cancer, liver cancer and classic Hodgkin’s lymphoma.

Another immunotherapy approach called adoptive cell transfer (ACT) collects and uses a patients’ own immune cells to treat their cancer. One of the more advanced forms of ACT is CAR T-cell therapy. CAR-T cell therapy employs the use of T-cells, which play a critical role in orchestrating the immune response and killing cells infected by pathogens. With the potential for this treatment to be effective against a wide variety of aggressive cancers, expectations and hopes are running high.