A central challenge for this group of diseases is the lack of competitive markets for vaccines and medicines in the LMICs where the diseases are most prevalent.

In spite of this challenge, R&D-based biopharmaceutical companies are working to discover new treatments to eliminate or control these diseases, through innovative mechanisms such as product development partnerships, IP sharing and open innovation. For example, The Tres Cantos Open Lab Foundation allows independent researchers to access GSK facilities, resources, and expertise to advance research into TB and malaria.

The Global Health Innovative Technology Fund, a partnership between the BMGF, the Japanese government, pharmaceutical companies, the Wellcome Trust and UNDP, invests and manages a portfolio of partnerships, mobilizing companies and academic organizations to get new medicines, vaccines, and diagnostic tools to people afflicted by NTDs.

In many cases, methods to prevent, diagnose and treat these diseases are known. Much harder, yet equally essential to eradication, is ensuring access to interventions. This is where innovative partnerships are important.

Many R&D-based pharmaceutical companies have committed to global drug donations until diseases are eliminated. The success of drug distribution campaigns relies on an integrated treatment approach, providing treatments for several diseases at the same time rather than separate campaigns for individual diseases. For example, a national programme can treat all children in a region for intestinal worms, onchocerciasis and lymphatic filariasis in a single school visit. These large-scale campaigns also offer an opportunity to reach people with other health interventions and can support stronger health systems and UHC.

The breakthrough global collaborative effort to control river blindness responded to the links between disease and rural development and for the first time recognized health as an investment with a positive return. Tim Evans, World Bank Group 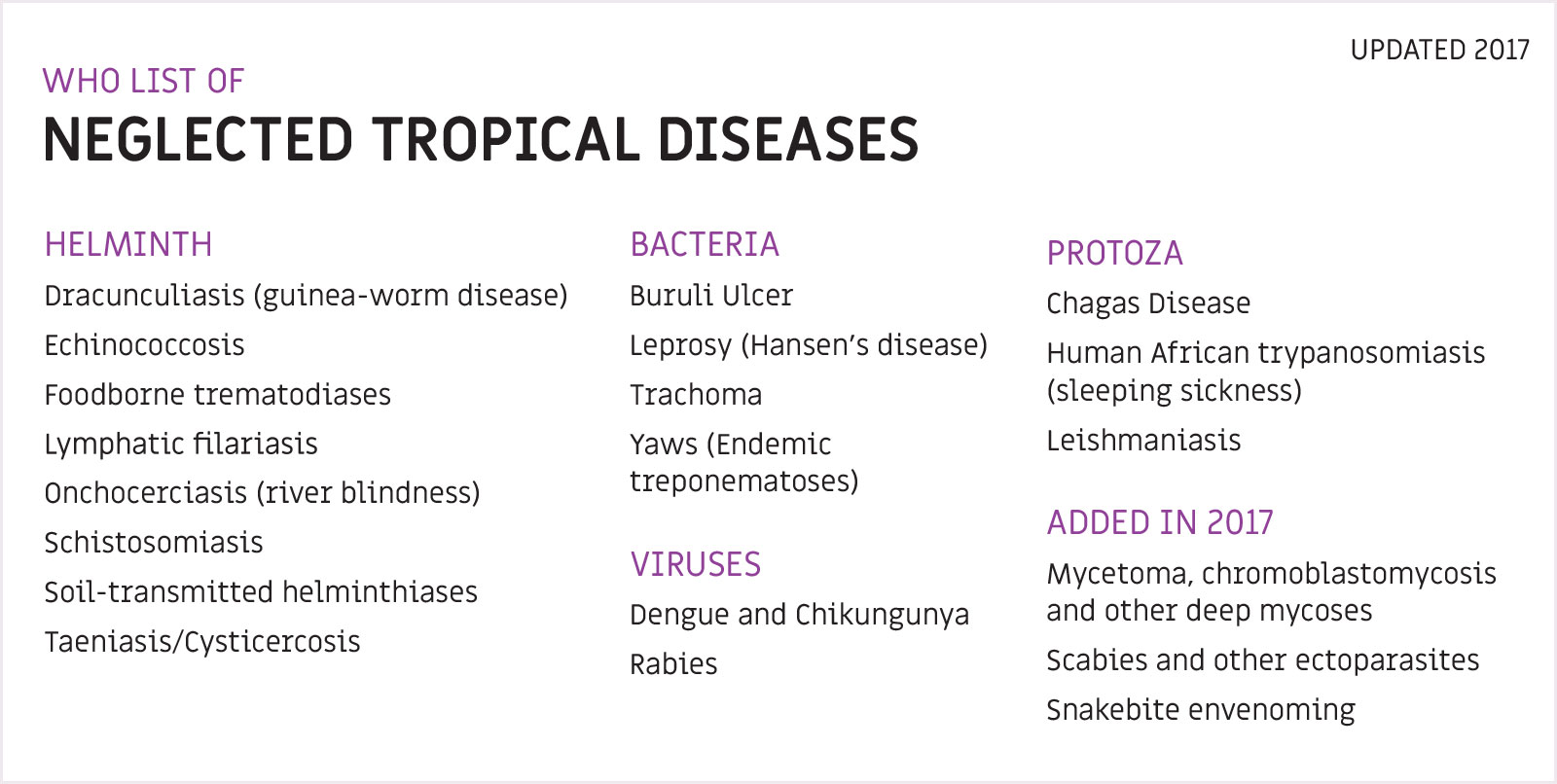 One in seven people suffer from an NTD, with the vast majority of cases in LMICs. NTDs are painful and can blind, disfigure, and cause severe disabilities, meaning they are frequently associated with stigma.

A notable milestone was the discovery that ivermectin for parasitic infections could be used to treat river blindness and lymphatic filariasis in humans. There was no market as those infected were too poor to pay, so MSD made an open-ended commitment to give away as much of the drug as necessary until river blindness is eliminated. Similar commitments followed from companies including Eisai and GSK. Lymphatic filariasis transmission has now been eliminated in 11 countries including China, Egypt, Sri Lanka, and Thailand.

The Drugs for Neglected Diseases Initiative (DNDi) works in partnership with industry, research institutions and the public sector on the most neglected diseases which fall outside the scope of market-driven R&D. USAID Neglected Tropical Diseases Programme delivers integrated NTD treatment to 300 million people in Africa, Asia and Latin America. Other programs focus on the elimination of particular NTDs such as Bayer, Sanofi and WHO’s work to tackle Chagas disease and African Sleeping Sickness, Pfizer’s partnership with the International Trachoma Initiative, Merck KGaA’s ‘One Merck for Schistosomiasis’ programme, Johnson & Johnson’s co-founding of Children Without Worms to tackle soil-transmitted helminthiases, and Novartis’ partnership with WHO on leprosy.

More and more countries are eliminating these diseases. River blindness and Chagas disease have been eliminated from several countries in the Americas. Morocco, Cambodia and the Lao People’s Democratic Republic have eliminated trachoma as a public health problem. In 2015, India was the first country to be declared yaws-free.

Progress has been enabled by the large-scale donation of medicines. In 2015, nearly a billion people received donated treatments for at least one NTD. The London Declaration is a flagship partnership through which the industry has committed 14 billion donated treatments over 10 years. By 2020, nearly USD 18 billion worth of medicines will have been distributed, the largest medicine donation the world has ever seen.

Preventative chemotherapy involves administering six medicines in different combinations, to combat at least five NTDs. 14 previously endemic countries have been declared free of at least one NTD that is receptive to preventive chemotherapy.

History has shown that with malaria there is no standing still—we move forward or risk resurgence. Bill Gates, Bill and Melinda Gates Foundation

Malaria control is an important tool for poverty reduction – households in Africa lose up to 25% of their income to the disease. Between 2000 and 2015, the rate of new cases of malaria fell by 37% globally. Since 2000, eight countries have eliminated malaria and many others have reduced transmission to low levels. However, malaria remains one of the world’s biggest killers.

Treatments have helped reduce malaria deaths. Artemisinin, discovered in in 1972, is particularly effective when combined with other medicines in artemisinin-based combination therapy (ACT). R&D is needed for new pediatric formulations given that children and pregnant women are most at risk of contracting malaria. Novartis, in partnership with The Medicines for Malaria Venture (MMV), launched the first dispersible ACT formulated for babies and children. Merck KGaA develops new drugs to treat and prevent malaria in children by screening compound libraries to identify new candidates. MMV in partnership with Sanofi and DNDi, launched the first anti-malarial drug resulting from a public-private partnership, which enables better adherence to treatment and reduces the risk of resistance. MMV also works with GSK to develop tafenoquine, which would be the first new medicine for the prevention of relapse of P vivax malaria in more than 60 years.

Control of malaria will be aided by the development of a vaccine. After over 30 years of research, GSK, along with partners, is making the new RTS,S vaccine available from 2018 through routine immunization programs to young children in Ghana, Kenya, and Malawi.

In addition to treatments and vaccines, elimination of malaria requires increasing access to antimalarials, equipping hospitals, supporting improved sanitation, training of health workers, and the strengthening of health systems. Ensuring access to vector control tools such as bed nets is fundamental.

For the first time in 10 years, global malaria cases are no longer falling, driven in part by drug resistance. Funding and tools are needed to tackle the real and growing threat of antimalarial resistance.

Although TB has long been preventable and curable. it is the ninth leading cause of death worldwide and the biggest infectious killer, above HIV. In 2015, 1.8 million deaths occurred from TB, 95% of which were in LICs and LMICs.

An estimated 53 million lives have been saved through TB diagnosis and treatment between 2000 and 2016. Drugs included in first-line TB treatments were developed more than 30 years ago. Current treatments require patients to take multiple antibiotics for 24 months or longer, are complicated to administer, and have significant adverse effects. Many patients stop their drugs early. Shortening treatment regimens is a priority.

Drug resistance is a growing threat. Each year, there are roughly half a million new cases of multi-drug resistant TB (MDR-TB). Thanks to breakthroughs by Johnson & Johnson and Otsuka, two new medicines have been approved for the treatment of MDR-TB. A priority is getting these new treatments to patients.

The TB Drug Accelerator is an effective example of pre-competitive collaboration, resource sharing, and leveraging expertise of partner organizations to speed the development of medicines. The consortium brings together nine pharmaceutical companies and academic organizations to speed up discovery and development of novel compounds against TB. It aims to develop five new pre-clinical drug candidates with treatment-shortening potential within five years. Coordinating previously siloed research teams and sharing knowledge of fundamental biology, screening capability and drug discovery resources has led to faster development timelines.

The path to eradication

There a number of new medicines and diagnostics in the pipeline, which may change the perspective for these neglected tropical diseases and hopefully allow us to go further towards eliminating or near eliminating these diseases by 2030.Dirk Engels, Director of Neglected Tropical Diseases, WHO

Much remains to be done to meet SDG target 3.3 to end epidemics of TB, malaria and NTDs by 2030. The challenge consists of two missions: delivering health services for prevention and those living with diseases and eliminating transmission by addressing resistance and vaccine development.

Neglected diseases thrive in areas that lack adequate sanitation. About 2.4 billion people do not have access to adequate washing facilities. Improving access to water, sanitation and hygiene will be crucial to combat NTDs. But these diseases are not restricted to LMICs; many are found among the poor living in G20 nations. NTDs can only be eradicated if all in wealthier nations receive the treatment and care they need.

Climate change, growing megacities, and conflict present a challenge. By 2030, more people will be living in areas at risk of neglected diseases. It is expected that climate change will increase the malaria burden in several regions of the world. War and refugee zones can increase exposure and susceptibility to infection. New approaches must deliver interventions in less time, provide flexible funding, and empower communities to administer care when external support is unavailable.

Comorbidity also remains a challenge, HIV patients are at greater risk of TB and malaria. There is a need to find new and improved treatments and interventions to tackle this joint disease burden.

Tackling sub-standard drugs and vaccines development remain critical to addressing drug resistance, given that antimalarials and antibiotics are the most commonly reported sub-standard or falsified products.

Drug resistance presents a major challenge to eradicating TB and malaria. The need for ongoing innovation and a robust pipeline for treatment will become more urgent as strains become resistant to traditional treatments.