Prior to the identification of HCV in 1989, so little was known about the virus that it was simply called non-A, non-B hepatitis. Since identification, effective treatments have been relatively rapidly developed. Compared to the first-ever HCV treatment approved in 1991, in which a patient faced cure rates of around 6%, drugs today have more than a 95% success rate over short treatment courses. That makes HCV the fastest viral disease ever to be identified and cured. It remains the only chronic viral illness that can be completely cured, allowing millions of people to regain their health and live full and productive lives.

Of those living with HCV, only 20% know that they are infected. Due to the blood-borne nature of the disease, many of those infected with HCV have contracted the disease through drug use. They tend to be the hardest to reach with the least access to care. But injecting drugs is not the only route to infection, and that misperception creates a stigma that keeps people from being screened. With a cure available, the barriers for eliminating HCV now lie in diagnosing those infected and increasing access to life-saving treatments.

Innovating against a silent killer

Imagine taking an injection and a pill that made you feel – every day – worse than you ever felt from the infection that was being treated. Alexea Gaffney-Adams, MD, infectious disease specialist

Hepatitis C is dubbed ‘the silent killer’ as it typically progresses without symptoms, often leaving patients unaware they are infected until their condition is very serious. HCV damages the liver slowly over many years, often moving from inflammation to scarring (fibrosis) to permanent, irreversible scarring (cirrhosis).

Once a patient has cirrhosis, the liver is unable to heal itself, and this condition can rarely be reversed. For those with end-stage liver disease, treatment is more focused on preventing further damage in an effort to avoid complications, including liver cancer, liver transplantation, and premature death. Hepatitis C has also been associated with other serious conditions, including diabetes, kidney disease, and depression.

In 1987, scientists working at Chiron Corporation, later acquired by Novartis, partnered with the CDC. Using a novel molecular cloning approach, they officially identified and named the virus hepatitis C in 1989.

Screenings to detect HCV in blood supplies were quickly developed, as blood transfusions were, and remain, the main route of transmission in the developing world . This dramatically reduced new infections, along with prevention and infection control measures designed to curb the spread of HCV. Scientists were also newly able to estimate the prevalence of HCV, leading to its recognition as a major global health issue. In some regions today, up to 2% of the population is infected with HCV.

Identifying the HCV molecular structure and genetic makeup enabled specific treatments to be developed. The genetic diversity of the virus, combined with patients’ weak immune response to infection, ruled out an effective vaccine. Instead, researchers focused on combatting the infection by producing a sustained viral response to clear it completely from the patients’ blood.

Interferon was the first, and for a time, the only treatment for hepatitis C. An interferon is a protein produced by the body’s immune system in response to an infection. Side effects were debilitating, and many patients dropped out of what was a very long course of treatment. It was also a largely ineffective treatment.

Step-by-step, scientists began to understand the virus’ life cycle and how it replicates itself in people. By 2010, there was considerable interest from the industry, with multiple drugs in development. And lessons were learned from HIV and the potential of protease inhibitors to block the virus from replicating.

While 77 investigational medicines failed in clinical trials over 1998-2014 – they were either too toxic to the patient, or not effective enough – they laid the groundwork for 12 approved medicines over the same period. In a landmark moment, a new class of medicines called direct acting antivirals was introduced in 2011. Through experiments in combination therapy, these medicines today can cure more than 90% of people in an eight to 12 week regimen, without the debilitating side effects of older treatments. 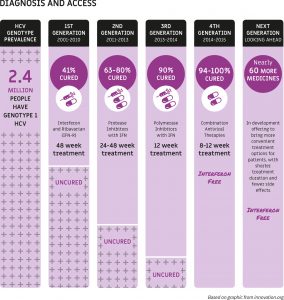 As of 2015, only 7% of the 71 million people with chronic hepatitis C had access to treatment that cures within three months. In part, this is due to lack of access to testing in many parts of the world; the vast majority of those affected by hepatitis C live in LMICs where testing facilities are not available. Combined with the absence of symptoms for some 80%, up to 57 million people today are unaware they are living with the disease.

For many of those that are diagnosed, healthcare payers may not cover the cost of innovative treatment. While characterized by some as initially expensive, these breakthrough and life-saving treatments are, in fact, both highly cost effective and transformative for patient lives. They improve quality of life, prevent the development of liver cancer, and costly and difficult liver transplants.

Comparisons are often drawn between the hepatitis C epidemic and HIV in the late 1990s. Both involve the global spread of an under-diagnosed disease that carries significant stigma, hardship, and cause life-long illness and death. Industry developed highly innovative and effective products to radically curb both global epidemics and transform people’s lives. In both cases, rapid development of access pricing and voluntary licensing initiatives increased access in the developing world, shortly after launch of the drugs in the developed world. Competition in the market brought about second and third generation drugs, and delivered both lower prices and newer, more effective, and convenient regimens. Moreover, prices paid in developed markets have provided the economic incentive for the development of new, innovative medicines. Through recourse to differential pricing, these innovative medicines can be brought to patients in need in the developing world, while maintaining the economic incentive for R&D provided by the developed world markets. Tackling the burden of HCV, however, has been hindered by a lack of large-scale global donor funding to expand treatment, unlike HIV.

While barriers exist to broad access, particularly in LMICs, where a lack of financing and awareness has hindered national programs, many countries have succeeded in making treatment more widely available. Individual companies have implemented initiatives to enable countries in the developing world to access lower cost DAAs, including differential pricing and voluntary licensing to generic manufacturers to facilitate scale up of national treatment programs. In Rwanda, despite facing many challenges as a low-income country, the government has developed a national treatment programme and is seeing rapid progress

There is widespread support, and optimism, for the WHO commitment to eliminate viral hepatitis (B and C) by 2030. Collaborative efforts and active policy and pricing discussions are underway.

A primary challenge is identifying those infected, working with at-risk individuals, the public health sector, and the R&D-based biopharmaceutical industry. With hundreds of millions of at risk individuals that should be screened and tested for HCV infection, future diagnostic approaches that are affordable, provide results in a single visit, and inform the choice of treatment regimen will be a huge asset in the fight against HCV.

Lastly, despite being a ‘master virus’ for which it was once thought there was no chance of a vaccine, there are now a number of candidates in development. An affordable, effective vaccine might just be the most powerful tool for defeating HCV.